Note: Some peaks mentioned above fall in the Indian State of Jammu & Kashmir but are  illegally occupied by Pakistan.

The tallest peaks in the other continents of the world are not even taller than Thirty tallest mountains of India.

Source: National Geographic Society
(Not counting the ones mentioned above)

Note – Only rivers longer than Brahmaputra are shown above. 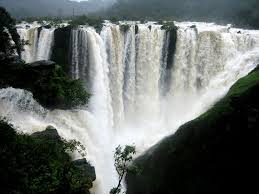 The earth has thousands of waterfalls, some of considerable magnitude. Their relative importance is determined not only by height but also by volume of flow, steadiness of flow, crest width, whether the water drops sheerly or over a sloping surface, and where it descends in one leap or in a succession of leaps. A series of low falls flowing over a considerable distance is known as a cascade.

Biggest deserts in the world