For thousands of years the Hindus have looked upon the Vedas as the fountain-head of all their knowledge, culture, heritage and existence. The breadth of Vedic literature is truly astounding. Varied topics satisfy the needs from that of a student brahmachari to a grihastha (householder) to a retired person including:

Sanskrit was the language used to communicate all these Vedic concepts. Sanskrit is made up of 2 words viz. Sanskara and krita, which means to instil a refined culture. Sanskrit is called Deva-bhasha, meaning the language of the Gods. Hence, it is also the oldest known language in the world. Sanskrit continues to be a living language even today during Hindu ceremonies when mantras (ritual verses) are chanted.

Sir Monier Monier-Williams, the author of the famous Sanskrit-English dictionary wrote:
“India has only one sacred language and only one sacred literature, accepted and revered by all adherence of Hinduism alike, however diverse in race, dialect, rank and creed. That language is Sanskrit and that literature is Sanskrit literature – the repository of Veda or ‘knowledge’ in its widest sense; the vehicle of Hindu theology, philosophy, law, and mythology; the one guide to the intricacies and contradictions of Hinduism; the one bond of sympathy, which, like an electric chain, connects Hindus of opposite characters in every district of India.”

The ancient Indian literary tradition was primarily oral i.e. sung or recited. As a result, the earliest records of a text may be much later than the date of its actual composition.

Bharata’s literary classic Natya Shastra is the Bhagavad Geeta of dramatic art. Kalidasa’s Shakuntala is a heroic play, a model for literary works. While Shudraka’s Mrichchhakatika was a play of the social class. Bhavabhuti was another well-known figure, his best being Malatimadhava and Uttaramacharita (based on Ramayana). The great Sanskrit poems are Kalidasa’s Raghuvamsa and Kumarasambhava, Kiratarjuniya of Bharavi, Sishupalavadha of Magha and Naishadhiyacharita of Sriharsha. Shorter poems of great depth were composed on a single theme like love, morality and sometimes of grave matters. The earliest and best collections of such verses called Muktakas are those of Bhartrihari and Amaruka.

The other Sanskrit works are Vasavadatta of Subandhu, Kadambari and Harshacharita of Bana and Dasakumaracharita of Dandin . The Panchatantra and Hitopadesha are collections of wisdom, teaching political science and proper conduct through animal fables. Earliest traces of Bhakti (a personal devotion to a god) are in the Vedas and Puranas. Bhakti is also found in the work of the Tamil Alvars (mystics who wrote ecstatic hymns to Lord Vishnu). Further flowering of the Radha-Krishna cult happened under the Hindu mystics Chaitanya in Bengal and Vallabhacharya at Mathura. Other Indian literature in the vernacular languages included the 12th century CE poems by Jaydev called the Gitagovinda (the cowherd Lord Krishna’s Song). Bhakti poems composed by Vidyapati in Maithili (eastern Hindi of Bihar) were of great influence on the Bhakti-traditions of Radha-Krishna in Bengal. In the 16th century CE, the Rajasthani princess and poet Meerabai addressed her Bhakti to Lord Krishna, as did the Gujarati poet Narsinha Mehta.

Bhakti was also addressed to Lord Rama, most notable being Ramcharitmanas by Tulsi Das in the Avadhi (eastern Hindi) language. Bhakti floods every channel of Indian intellectual and religious life.

The early Gurus or founders of the Sikh religion, especially Nanak and Arjun, composed Bhakti hymns to their concepts of deity. These are the first written documents in Punjabi and form part of the Adi Granth (first book), the sacred scripture of the Sikhs, which was first compiled by Arjun in 1604 CE. 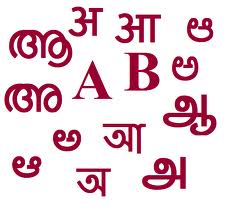 India has a total of 1,652 different languages and dialects! The study of language has been developing into a science since the first text on grammar of Sanskrit by Panini, thousands of years ago.

The origin of most scripts for the Indic languages can be traced to Brahmi. Its adaption, Devanagari is used for Indian languages including Sanskrit, Hindi, Marathi, Nepali and Prakrit. Gujarati, Bengali, Assamese, Oriya, Manipuri, Punjabi, Sindhi etc. all have individual writing systems derived from Devanagari.

About 23 Dravidian languages are spoken mainly in southern India, including Tamil, Kannada, Malyalam and Telugu. Tamil writings also belong to the same era of classical Sanskrit. Themes of devotional love like the Tolkappiyam (Old Composition) are very ancient. Two long Tamil verse romantic epics were written viz. Silappatikaram (the Jeweled anklet) by Ilanko Atikal, which has been translated into English (1939 and 1965); and its sequel Manimekalai (The Girdle of Gems), a Buddhist work by Chattanar. Thiruvalluvar, a celebrated Tamil poet, wrote the epic Thirukkural, a work on ethics.

In medieval Indian literature, many other works were regional. Examples are the Charyapadas in Bengali, Tantric verses of the 12th century CE and later the Lilacharitra in Marathi. Many Kannada and Gujarati works were popular tales based on ancient Sanskrit themes. Other example was in Rajasthani of the bardic tales of chivalry and heroic resistance to the first Muslim invasions – such as the 12th-century CE epic poem Prithiraja-raso by Chand Bardai of Lahore.

In the 16th century CE, Jagannath Das wrote an Oriya version of the Bhagavata Purana. Tuncattu Eruttacchan, the father of Malayalam literature, wrote commentaries of traditional literature. In 18th the century CE, Assamese and Marathi prose chronicles, poetic ballads and folk drama and dances became popular. Some traditional Indian literature was derived from the Buddhist and Jain texts written in the Pali language and the other Prakrits (medieval dialects).

The barbaric Afghan invader Mohammad Ghauri said:
“I have heard that there is a country of people where the mountains are made of gold, the cultivable lands are made makhmal and the children of this land play the toy balls made of diamond.”

Invasions of Arabs, Persians, Turks, Afghans and Mongols, which began in the 7th century CE, resulted in the influence of Islamic culture in India. The Urdu poets almost always wrote in Persian forms, using the ghazal for love poetry, the masnavi for narratives and the marsiya for poems. Urdu gained use as a literary language in India. The ghazals of Mir and Ghalib mark the highest achievement of Urdu lyric verse.

Amir Khusroo – a 13th century CE Sufi philosopher and poet from India once visited Iran. In Iran he was asked to introduce himself. And his response was marvelous: “Why are you asking me to introduce myself! I am a parrot of India?”

The Rig Vedic Sanskrit is the oldest attested member of the Indo-European language family. The discovery of Sanskrit by early European explorers of India led to the development of comparative Philology. The scholars of 18th century were struck by the far reaching similarity of Sanskrit, both in grammar and vocabulary, to the classical languages of Europe.

Sir William Jones said in 1786 CE:
“The Sanskrit language, whatever be its antiquity, is of a wonderful structure; more perfect than the Greek, more copious than the Latin, and more exquisitely refined than either, yet bearing to both of them a stronger affinity, both in the roots of verbs and the forms of grammar, than could possibly have been produced by accident; so strong indeed, that no philologer could examine them all three, without believing them to have sprung from some common source, which, perhaps, no longer exists; there is a similar reason, though not quite so forcible, for supposing that both the Gothic and the Celtic, though blended with a very different idiom, had the same origin with the Sanskrit…”

During the British era, literature evolved in all the Indian languages as a result of the influence of Western educational institutions. Literary tradition encompassed the novel, short story, essay and literary drama. Swami Vivekananda’s works are considered to be great examples of the English literature in India. During the last 150 years many writers have contributed to the development of modern Indian literature, writing in dozens of local languages as well as in English. One of its greatest representatives is Sir Rabindranath Tagore, the first Indian to win the Nobel Prize for literature (1913 CE). Much of his prose and verse is available in his own English translations. Work by other great Indian writers include Rajaram Mohan Roy, Muhammad Iqbal, Mulk Raj Anand and R. K. Narayan, who was a writer of novels and tales of village life in southern India. The first of Narayan’s many works, ‘Swami and Friends’, appeared in 1935; among his more recent titles are ‘The English Teacher’ (1980), ‘The Vendor of Sweets’ (1983), and ‘Under the Banyan Tree’ (1985). The other well-known writers are C. Rajagopalachari, Veer Savarkar, A.K. Ramanujan (for his translations of Tamil classics), Sarojini Naidu, Aurobindo, Khushwant Singh, Nayantara Sahgal, Salman Rushdie, Vikram Seth, Amitav Ghosh, Ashwin Sanghi, Amish Tripathi etc.