Indians love celebrating! Every little occasion from the harvesting of crops, welcoming the spring or rain, to seeing the full moon lends itself to joyous celebrations splashed with colours, drama, dances, music and songs. Natya is an amalgamation of dance, music, song and drama. Natya Shastra 1.14-15 states that natya can be the fifth Veda based on itihasa (ancient Vedic histories) to convey the message of Dharma (righteousness), artha (material wealth), kama (romantic desires) and moksha (salvation). Natya must contain the significance of every Vedic scripture and forward every art.

Most of these festivals are common to most part of India however they may be known by different names in different parts of the country: In addition, there are local festivals celebrated accompanied by music, dance, and gaiety. In many temples, images are taken in procession in chariots pulled through the street by devotees. Most temple festivals are accompanied by village fairs, cattle, camel, or elephant fairs, and last three days to a month. Some of the popular ones are: 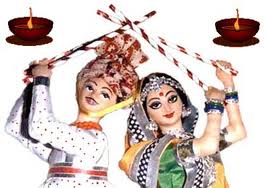 Lord Brahma created natya by taking literature from the Rig Veda, songs from Sama Veda, abhinaya (expressions) from Yajur Veda and rasa (aesthetics) from Atharva Veda. Then, the Natya Shastra was compiled by Bharatha as the source of all forms of Indian classical dance. It is regarded as the fifth Veda. The Natya Shastra details different kinds of postures, facial expressions, mudra (hand expressions), attire and ornaments to be used. All dance forms are structured around the nine rasa (emotions) viz. hasya (happiness), shoka (sorrow), krodha (anger), karuna (compassion), bhibasta (disgust), adhbhuta (wonder) bhaya (fear), viram (courage) and shanta (serenity). Thus, the body is beautifully used as a medium of communication to effectively express the various emotions.

All Indian classical dances are devotional in content including:

Lord Folk dances are easier to understand and perform. They do not require the expertise of a classical dance performer. They are extremely enjoyable. All-night dance dramas are popular throughout India and are performed during all major festivals, ceremonies etc. Folk dances vary according to the region and sub-cultures. Puppet dances/ drama are also dominant in Indian folklore.

Origin of music in India is traced to the shabdha brahma i.e. Om. The Vedas, representing the most ancient literature known to the world, are set to a distinctive melody that is absolutely soothing. Music is the soul of the cosmos. In India, music has been categorized by the scriptures into two major streams known as the margi (classical) and the desi (folk). The origins of classical music can be traced to the Natya Shastra, a Sanskrit treatise on drama and music. The 2 classical traditions are Hindustani in north India and Carnatic in the south. Both traditions derive inspiration from the indigenous Bhakti (“devotional”) movements.

The seven notes called sapta svaras of Indian classical music are Sa (Shadjam), ri (Rishabham), ga (Gaandhaaram), Ma (Madhyamam), Pa (Panchamam), dha (Dhaivatam) and ni (Nishaadham). A raga is a scale of notes and melody. Raga (over 100 different melodies) is India’s contribution to the world of music. The other fundamental element of Indian classical music is tala, the rhythm or the cyclic pattern. There are 35 principal talas. The most common tala is the Adi (first) tala.

The two main vocal traditions in Hindustani music are dhrupad and khayal. Dhrupad developed as a part of worship in temples and various rituals such as yajnas. Khayal (imagination) has a romantic content. Other light classical music varieties include bhajans, kirtans, dadra, thumris, tappaas, etc. Gharanas (schools) were established under the patronage of princely states. Each of the gharanas developed distinct facets and styles of presentation and performance. 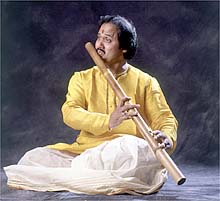