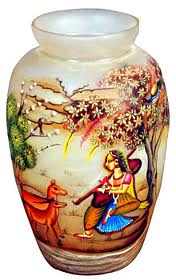 It is incredible how ancient practices and traditions in Indian art and crafts have continued unbroken for over 5,000 years. For centuries, Indian handicrafts have been distinguished for their aesthetic and functional value. Various traditions, rituals, geographic and climatic conditions, lifestyles and cultures have given birth to numerous styles and designs of art, which continue to evolve with the evolution of the civilization.

UNESCO report, 2007, states that India has around 1,69,00,000 craftsmen in various forms of utilitarian and creative arts are still involved and managing to survive on the basis of their creativity and production.

The Sanskrit word kala (art) means the divine attributes, which from everyday life, it reflects a worldview. No distinction is made between fine and decorative, free or servile arts. The eighteen or more professional arts (silpa) and sixty-four vocational arts (kala) embrace all kinds of skilled activity. There is no difference between a painter and a sculptor. Both are known as silpi or karigar. The term silpa designates ceremonial act in the Asvalayana Srautasutra, and in this sense it is close to karu, which in the Vedic context stands for a Visvakarma, a god of creation, is mentioned as dhatukarmara, while karmara alone refers to artisans and artificers (Rig-Veda X.72.2; Atharva-Veda. Visvakarma is supposed to create things out of dhatu, “raw material”, an act known as sanghamana (Rig-Veda X 72.2).

India is a land abundant in raw materials that have lent themselves to the creative hands of the Indian craftsmen. From expensive materials like ivory, gems and marble; to cheaper ones like clay, cane and bamboo and wood, Indian handicrafts have an amazingly captivating beauty. Another thrilling factor is the numerous processes that these materials go through before they take final shape. Processes like the ‘chikan’ work and ‘phulkari and bagh’ work on cloth; certain types of polishing and metal casting or even the filigree work on metals is unique to Indian art.

Techniques have been experimented and perfected upon through centuries. Indian art features spiral and curvaceous lines, vines and tendrils, round figured women, circular amulets, colored gemstones, arches and domes, haloed deities, crescent moons and the sun. Nature has been very inspiring in this case, and Indian art has borrowed freely from it. These crafts remained coveted and the skills were handed over from generation to generation.

The arts of India expressed in architecture, sculpture, painting, jewelry, pottery, metalwork, and textiles, were spread throughout the Far East with the diffusion of Buddhism and Hinduism and exercised a strong influence on the arts of China, Japan, Myanmar (formerly known as Burma), Thailand, Cambodia, and Java.

Examples of the 3rd millennium BC from the Indus Valley, found among the remains of the burnt-brick buildings of Mohenjo-Daro, include alabaster and marble figures, terra-cotta figurines of nude goddesses, terra-cotta and faience representations of animals, a copper model of a cart, and numerous square seals of ivory and of faience showing animals and pictographs. The similarity of these objects to Mesopotamian work in subject matter and stylized form indicates an inter-relationship of the two cultures and a possible common ancestry.

In Vedic and later times, from the 2nd millennium to the 3rd century BC, connections with Middle Eastern culture are not evident. An example of the earlier phase of this period is a 9th-century BC gold figurine of a goddess, found at Lauriya Nandangarh. Later, from 600 BC to historical times, common examples include finely polished and ornamented stone disks and coins representing many kinds of animals and religious symbols.

Around 1st century BC the Sadanga or Six Limbs of Indian Painting, were evolved, a series of canons laying down the main principles of the art. Vatsyayana, who lived during the third century AD, enumerates these in his Kamasutra having extracted them from still more ancient works. These ‘Six Limbs’ have been translated as follows:

The subsequent development of painting indicates that these ‘Six Limbs ‘ were put into practice by Indian artists, and are the basic principles on which their art was founded.

The history of cave paintings in India range from drawings by pre-historic man in ancient and early medieval times, from 2nd century BC in the caves of Central India, typified by those at the Bhimbetka rock shelters (some of them from before 5500 BC) to elaborate frescoes on the walls of Ajanta and Ellora to 8th – 10th century AD. Other fine examples are the murals of Sittanavasal, Bagh, Armamalai Cave (Tamil Nadu), Ravan Chhaya rock shelter, Kailasanatha temple in Ellora Caves. There are known more than 20 cave locations around India containing murals from this period, mainly natural caves and rock-cut chambers.

Other paintings include Rajput paintings; Moghul paintings, Mysore paintings, Tanjore paintings, Madhubani painting, Warli paintings, Pattachitra and the Bengal school of paintings. From geometric designs to floral to images of gods and goddesses are included. Wall hangings are symbol of welcome and hospitality in the Indian context, besides whetting the craving for the aesthetic.

Temple Sculptures were mostly produced in stone, clay, ivory, copper, and gold in the Hindu, Buddhist and Jain temples.

Valued for their royal patronage, besides artistic excellence, these artistic pieces are a culmination of exquisite workmanship and artistic perception. Flawlessly crafted using different raw materials and designs, with great attention invested on intricacy and detail, they are matchless in beauty and range. Coming in different range and variety, with exclusive styles and execution, their beauty is awesome. 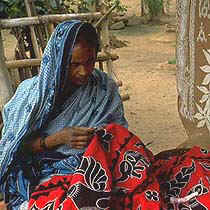 Indians have been very fashionable from the very ancient times if the sculptural evidence is anything to go by. Cotton cloth has always been worn in India by the masses while the rich favored the use of silks. Elaborate head-dresses and jewelry were even sported by men. The earlier dress code revolved around wrapping the body with varied lengths of cloth.

Surprisingly, though styles were given a great deal of importance, stitching was not. Women would use one length of piece as the blouse and tie the other round their waist as a sari. These would accentuate their figures, making them look attractive. The typical costume of the Indian women, are the Sari, Salwar Kameez and the Ghaghra Choli. The diverse cultures and traditions have greatly influenced the styles of these costumes.

Sari, the six-yard length of cloth is still draped beautifully in the most intriguing manner. It is worn with a stitched blouse. Usually six metre in length, the sari in its most accepted form is worn with a blouse and petticoat. The sari is pleated in the front, tucked into the waistband of the petticoat, and the end is flung over the shoulder, displaying the pallav, which has intricate designs on it. There are regional variations in the way it is worn. In the western states, the pallav is displayed in the front. In Maharashtra, the sari is 9 metre long and is worn tucked between the legs. Half saris are worn by young girls in the south and the northeastern regions.

Salwar Kameez are worn mainly by the women of northern India but is favored all over India by now. It includes a baggy pair of pyjamas called the Salwar, worn with a long and flowing shirt called Kameez. The Kashmiri and the Himachali women wear a similar dress. Theirs is thicker to suit to the climate and the embroidery done on them is particular to the region. In Lucknow, the baggy pajamas are replaced by tight and long leggings that form many folds at the ankles. These are called churidars, suggesting ‘bangles’. So comfortable is the dress that it is worn by most working women across India.

The Ghaghra Cholis with their glittering mirror work is the most attractive. This comprises of long pleated skirts, known as Ghaghra or Lehenga, and is worn with twin blouses. The blouses have elaborate mirror work and patch work on them and are very colorful. It is designed to leave the back and midriff bare. This type of dresses is mainly by women in Rajasthan, Uttar Pradesh, Haryana and Gujarat.

Variations of this dress are worn in the northeast and southern states. These are known as half-saris. In Meghalaya, the women favor the jyensyem, a traditional dress consisting of two ankle length pieces of cloth gathered at the shoulders. In Arunachal, Nagaland and Mizoram they prefer a blouse and a length of cloth wound around the waist and running down the ankle like a skirt, but more closely resembling the male Lungi of the south.

As for Indian men, the most favored dress is the western shirt and trousers. In the rural areas, the lungi or dhoti (long piece of cloth wrapped around the legs) is worn. The pyjama and Kurta (long shirt like with closed is worn at home during leisure.