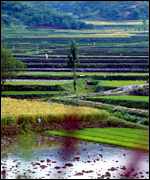 The top wheat exporters in the world, 2009

Source – UN Food and Agriculture Organization, US Dept of Agriculture
(in thousands of metric tons)

Top rice exporters of Rice in the world, 2010

The farmers and their families use most of their crops. Half of all Indian farms are less than 2.5 acres (1 hectare) in area. Only 4 percent cover more than 25 acres (10 hectares). About two-thirds of the farmers in India own their own land. Most of their farms become smaller and smaller with each generation because of inheritance customs.