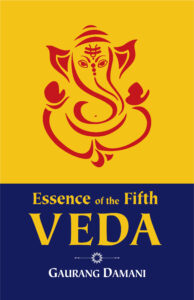 I feel truly blessed by Paramatma as I have been able to read several Vedic scriptures. I feel it is my Dharma (my reason to be, or my righteous duty) to make this immense Vedic knowledge of India’s ancient history and Sanatana Dharma available to as many people as possible using simple language.

My first book ‘Essence of the Fifth Veda’ adds relevant Puranic stories to the basic narration of Ramayana and Mahabharata. This fast-paced book traces over 265 epic-related geographical locations that are identifiable even today. The lesser-known facts given in this book will lead the reader to realize that our epics are NOT mythology, but HISTORY as it actually happened. The book also summarizes in simple language, the way to blissful living as recited in Yoga Vasishtha and Bhagavad Geeta.

This delightful book is published by Motilal Banarsidass Publishing House, one of the oldest publishers of Indology books. This book is now also available online on:

A few pages of ‘Essence of the Fifth Veda’ can be viewed here.

Book 2 will be a summary of 121 Vedic scriptures including: