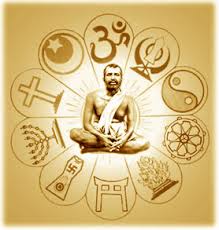 Adherents of all Religions by six continental areas, 2012

Note: Religions marked in bold originated in India.  India is also the birthplace for the Ahmadiyya faith (an Islamic reformist movement)

There are about 1.1 billion followers of Hinduism in the world. Hinduism is the only major religion of the world that can neither be traced to a specific founder nor has a holy book as the one and only scriptural authority. Hinduism is one of the oldest extant religions with its roots extending back to prehistoric times. The rituals and the religious practices of the Indus Valley Civilization gifted a number of holy books to the world including, the Bhagwad Gita, the Mahabharata, the Ramayana, the Vedas, the Upanishads and the Puranas.

Hinduism believes that a person’s life is actually the journey of the soul. The Hindu goes through a series of reincarnations that eventually lead to ‘moksha’, or salvation, freeing the body from the cycle of rebirths (after reaching spiritual perfection). Purity of mind and action is essential, as ‘karma’ or actions in life determine your reincarnation. ‘Dharma’ on the other hand controls the laws of the social, ethical and the spiritual.

The three main manifestations of the omnipresent God are: Brahma, the creator of the universe, Vishnu the protector and Shiva the destroyer. Wars between the Asuras (demons) and the Devas (Gods) are a common part of the Hindu mythology. Hindus are divided into a large number of social groups called castes viz. Brahmins, Kshatriyas, Vaisyas, and Sudras, which historically were assigned by profession, not by birth. Hindus follow the principle of ahimsa, non-injury to living creatures, especially applies cows, which Hindus believe are sacred animals.

More than a thousand years ago, Adi Shankaracharya, who was born in Kerala, established several mathas (religious and spiritual centers) including at Badrinath in the north (Uttar Pradesh), Puri in the east (Orissa), Dwaraka in the west (Gujarat), and at Shringeri and Kanchi in the south.

India has the third largest Muslim population in the world, after Indonesia and Pakistan. Some Muslim are descendants of Islamic people from western and central Asia, but most were forcefully converted to Islam. Some continue many Hindu practices. About 65% of Indian Muslims are Sunni; 30% are Shiite and rest are Ahmadis and Deobandis.

The shrines of some of the most famous saints of Sufism like Moinuddin Chishti and Nizamuddin Auliya are in India and attract visitors from all over the world. Though Islam came to India in the early 7th century with the advent of Arab traders, it started to become a major religion only under the Delhi Sultanate (1206–1526) and the Mughal Empire (1526-1858).

The first Indian converts were made by St Thomas, the Apostle himself in 52 AD soon after the Crucifixion. St. Thomas preached the Gospel in many parts of India and is said to have been martyred in Madras (now Chennai) where he was was buried in what is now known as the Roman Catholic Cathedral of Mallapur. The Syrian Christian church of Kerala is a blend of the Indian traditions and Christian orthodoxy. The devotees remove their shoes at the entrance of the church, and a marriage ceremony is not complete without the groom covering the head of the bride with a red veil and places around her neck the thali (a gold chain with a special pendant, which is symbolically worn by all Hindu women). The converts have adopted the Hindu caste systems as a means of social organization within the church.

Sikhism was founded by Guru Nanak in 1469, as a movement to counter Islam. Sikhs form one of the largest groups in the army and are the country’s leading wheat farmers. Its basic tenets are similar to that of Hinduism, with the important modification that the Sikhs are opposed to caste distinctions.

Sikhs worship in the Gurdwaras, baptize their children at a ceremony known as ‘pahul’. The Holy Book of the Sikhs is the Granth Sahib which contains the works of ten Sikh gurus. It was the tenth guru of the Sikhs who gave them their identity by enjoining upon them the Five Ks. All followers of Sikhism are never to be without the kanga (comb), karha (bangle), kacha (distinctive kind of underwear), carry a kirpan (sword) and kesh (leave their hair uncut). The sikhs are immediately recognizable by their turbans and beards. Every man, woman and child gives his or her time to help in the sewa (service) at Gurudwaras. Food is cooked by the devotees and distributed twice a day which, people from all social strata eat together.

Buddhism ranked as India’s chief religion in ancient times. Strictly speaking, Buddhism is not a religion, but a system of philosophy and a code of morality. Buddhism was founded in northern India, when prince Siddharta renounced the world and sought enlightenment.

Today there are two major schools of Buddhism. The Hinayana, ‘small vehicle’, is an individual pursuit and hold the path to nirvana, the ultimate aim all Buddhists. The other school – Mahayana, ‘large vehicle’ school holds the belief that all followers will eventually lead to the salvation of the entire world.

Emperor Ashoka was a great follower of Buddhism and he popularized Buddhism throughout India and abroad. The religion had a great influence on the architecture of India. Around 85,000 stupas or dome-shaped monuments, with the teachings of Buddhism engraved on rocks and pillars, were constructed. The famous Ashoka Pillar at Sarnath in Madhya Pradesh, attracts scores of visitors around the year.

The period between the 400 CE and 1000 CE saw gains by Hinduism at the expense of Buddhism. A continuing decline occurred after the fall of the last Empire supportive of Buddhism: the Pala dynasty in the 12th century CE. This continued with the later destruction of monasteries by the new Muslim conquerors and their attempts to spread Islam in the region. The resulting occasional and sporadic destruction of temples did not affect Hinduism, but for Buddhism the destruction of the stupas has been attributed with a rapid and almost total disappearance from North India, resulting in an absorption into either Hinduism or Islam.

Lord Adinath has been accepted as the historical founder of Jainism or first tirthankar or ‘finder of the path’. Mahavir, a prince who propagated the Jain religion, was born in 626 BC at Kundalapura, Bihar, a city frequently visited by Buddha, who was a contemporary. Mahavir was the 24th and the last tirthankar. Some historians believe that the 22nd Jain tirthankar, Neminath was a cousin of Lord Krishna and the 23rd tirthankar Lord Parshwanath was a prince from Varanasi and lived at a time, when the Upanishads were written. Also during the time of the 23rd tirthankar, Jainism was known as the “Nirgranth” philosophy, as mentioned in ancient Buddhist literature.

The Jains are divided into two sects, the Shwetambaras and the Digambaras. The latter are more austere of the two and the name literally means ‘sky clad’. As a sign of their contempt for material possessions, they do not even wear clothes. They are chiefly monks and prefer to stay within the confines of their monasteries.

Like Buddha, Mahavir too rejected the authority of the Brahmin priest and their rituals, and advocated the equality of men. Both doctrines advocate non-violence and respect for all forms of life; both religions have an established order of monks and nuns. The orthodox among them are seen wearing a white cotton mask covering the nose and mouth across the face, and sweeping the ground before them as they walk for the fear of harming even the smallest insect.

Founded in Persia by the prophet Zarathustra in the 6th or 7th Century BC, Zoroastrianism is one of the oldest religions in the world. He was born in Mazar-i-Sharif, which is now in Afghanistan. The followers of Zoroastrianism are known as Pharsis, since they originally fled to India to escape persecution in Persia.

Zoroastrianism was one of the first religions to advocate the omnipotent and invisible God. Zend-Avesta, their holy book describes the continual conflict of the good and the evil. Their God Ahura Mazda is the god of light and is symbolized by fire. Man ensures the victory over evil by following the principles of ‘humata’ or good thoughts, ‘hukta’ or good words, and ‘huvarshta’ or good deeds.

Parsis worship in fire temples and wear sarda or sacred shirt and a kasti or sacred thread. A ceremony known as ‘Navjyote’ is performed when the children first wear the sacred thread. Since Parsis believe in purity of the elements of the earth, they do not cremate or burn the dead. Instead the bodies are left in ‘towers of silence’ where they are cleaned by the vultures. Unfortunately, there are not many Pharsi communities left in India, and their number is gradually declining.

The three main Jewish communities of India are: Bene Israel, Kochi and Kolkata’s Baghdadi Jews. Besides there were Ashkenazi Jews and a community in northeast India which claim Israeli origin and call themselves Bene Menashe.

Bene Israeli Jews came as merchants in search of spices, sandalwood, cloves, ivory and precious stones, and have lived for over 2,000 years in Mumbai. Some of these are descended from Jews who escaped persecution in Galilee in the 2nd century BC and were identified as “Black-Jews”.

One belief about Kerala Jews, is that 10 Jewish families released from jail by a Persian king in 605 BC came by ship to Kodungallore. Another group must have followed in 586 BC when Judea was defeated by Babylon. There were many subsequent waves of migration in 369 AD and most historians agree that the local Hindu rulers did everything to settle the new immigrants. India is perhaps one of the only country in the world where there has never been any anti-Semitic sentiments expressed by the local communities, except when Kochi’s Jews were indeed persecuted – not by Indians but by the Portuguese, following in the inglorious traditions of the Inquisition. With the help of the Hindu maharaja and the Dutch, Kochi’s Jewish community rebuilt its synagogue, burned by the Portuguese, in its current location near his maharajah’s palace. It has remained there, unmolested, ever since.

Jews believe that Moses’s prophecies are true, and Moses was the greatest of the prophets. The Written Torah (first 5 books of the Bible) and Oral Torah (teachings now contained in the Talmud and other writings) were given to Moses and that there will be no other Torah.