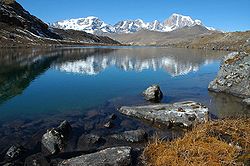 India is the world’s most diverse country in terms of its land, people, culture, climate, religion, history, geography, climate, languages and mineral wealth.

India is amongst the 17 megadiverse countries of the world, which harbor the majority of the Earth’s species and are therefore considered extremely biodiverse. India hosts 7.6% of all mammalian, 12.6% of all avian, 6.2% of all reptilian, 4.4% of all amphibian, 11.7% of all piscine, and 6.0% of all flowering plant species.

Note:
– This census includes the Tibetan area illegally occupied by China, as Chinese land
– The total Indian area as claimed by US census is 2,973,193.

Indian landmass includes deserts, forests, and one of the world’s rainiest areas, broad plains, mighty rivers, the tallest mountain system in the world and tropical lowlands. India’s coastline measures 7,517 km (4,700 mi) in length; of this distance, 5,423 km (3,400 mi) belong to peninsular India and 2,094 km (1,300 mi) to the Andaman, Nicobar, and Lakshadweep island chains. The Arabian Sea lies to the west of India, and the Bay of Bengal to the east. About 6% of land in India is barren and an additional 4.6% is cultivable wasteland and 8.7% is fallow land. India has three main land regions:

The highest mountain system in the world, rises in India. It curves for about 2,410 km from northernmost India to northeastern India. The Himalaya is as much as 320 km wide in some places. It includes India’s tallest mountains, K2 at 28,250 feet (illegally occupied by Pakistan) and Kanchenjunga which is 28,208 feet (8,598 meters) high. Many other Himalayan mountains are more than 20,000 feet (6,100 meters) high. Many kinds of wildlife, including tigers, monkeys, rhinoceroses and deer, live in the foothills.

The Northern Plains lie between the Himalaya and the southern peninsula. The Northern Plains region includes the valleys of the Brahmaputra, Ganges, and Indus rivers and their branches, which rise in the Himalaya from the constant mountain snows. The Brahmaputra and the Ganges are India’s longest and most important waterways. This region makes up the world’s largest alluvial plain (land formed of soil left by rivers). The soil ranks as the most fertile in the world. The flatness of the plains makes them easy to irrigate. Most of the Indian people live in this region.

3. The Deccan or southern plateau

The Southern Plateau, a huge plateau, forms most of the southern peninsula. It slants up toward the west, where it meets the Western Ghats, a rugged mountain range that is 5,000 feet (1,500 meters) high. This range falls sharply to a narrow coastal plain. In the east, the Eastern Ghats, another range, rises 2,000 feet (610 meters) at the edge of the Deccan. This range gradually slants down to a coastal plain much wider than the one in the west. The Western and Eastern Ghats meet at the southernmost point of the Deccan in the Nilgiri Hills. The Vindhya, which is 4,000 feet (1,200 meters) high, and other mountain ranges extend across India and separate the Deccan from the Northern Plains.

The Deccan has farming and grazing land, most of India’s ores, and forests filled with elephants and other large animals. Major rivers in the region include the Cauvery, the Godavari, and the Krishna. They flow eastward through the Deccan to the Bay of Bengal. The rivers sometimes overflow in the rainy season.

According to Indian Ministry of Environment and Forests, the forestlands in India cover about 23.68% of the total land area as of December 2011. As many as 778,424 sq km of the country’s geographical area was under forest cover. India’s tree cover in 2007 was about 2.82% of India’s land mass. Commercial forestry by-products such as charcoal, fruits and nuts, fibers, oils, gums, and resins are among the most valuable commodities.

The forests, plains, hills, and mountains of India are inhabited by a wide variety of animal life. Tigers and panthers are present in some sections. Among other species of the cat family are snow leopards, jungle cats and clouded leopards. Elephants are found along the northeastern slopes of the Himalayas and in the remote forests of the Deccan. Other large quadrupeds indigenous to India include rhinoceroses, black bears, wolves, jackals, dholes, wild buffalo, wild hogs, and several species of apes, antelope, and deer. Various species of wild goats and sheep abound in the Himalayas and other mountainous areas. Ibexes and serows, which are related to chamois, are also among the mountain fauna. Pygmy hogs, bandicoot rats, and tree mice are typical of the smaller quadrupeds.

Among noteworthy examples of the tropical birdlife of India are parrots, peacocks, kingfishers, and herons. The rivers and coastal waters of India teem with fish, including many edible varieties.

In the arid areas in the North-west, the flora of India is sparse and largely herbaceous. Various thorny species, including representatives of the genera Capparis (caper) and Zizyphus (jujube) are common. Bamboo occurs in some areas, and among the few varieties of trees is the palm.

The Gangetic Plain, which has more abundant supplies of moisture, supports many types of plant life. Vegetation is especially luxuriant in the southeastern part of the plains region, where the mangrove and the sal, a hardwood timber tree, flourish. Many varieties of arctic flora are found on the higher slopes of the Himalayas. The lower levels of the chain support numerous families of subtropical plant life, notably the orchidaceae, and are densely forested. Coniferous species, including cedar and pine, predominate in the northwestern portion of the Himalayas region. To the east, slopes of the Himalayas abound with tropical and subtropical types of vegetation. An especially noteworthy genus is the Rhododendron. Among the predominant trees are the oak and magnolia.

The Malabar Coast of the southwestern Indian peninsula and the slopes of the Western Ghats, areas of much rainfall, are thickly wooded. Evergreens, bamboo, and several varieties of valuable timber trees, including teak, predominate in this region. Extensive tracts of impenetrable jungle occur in the swampy lowlands and along the lower elevations of the Western Ghats. The vegetation of the peninsular plateau is less luxuriant, but thickets of bamboo, palm, and deciduous trees are found throughout the Deccan.